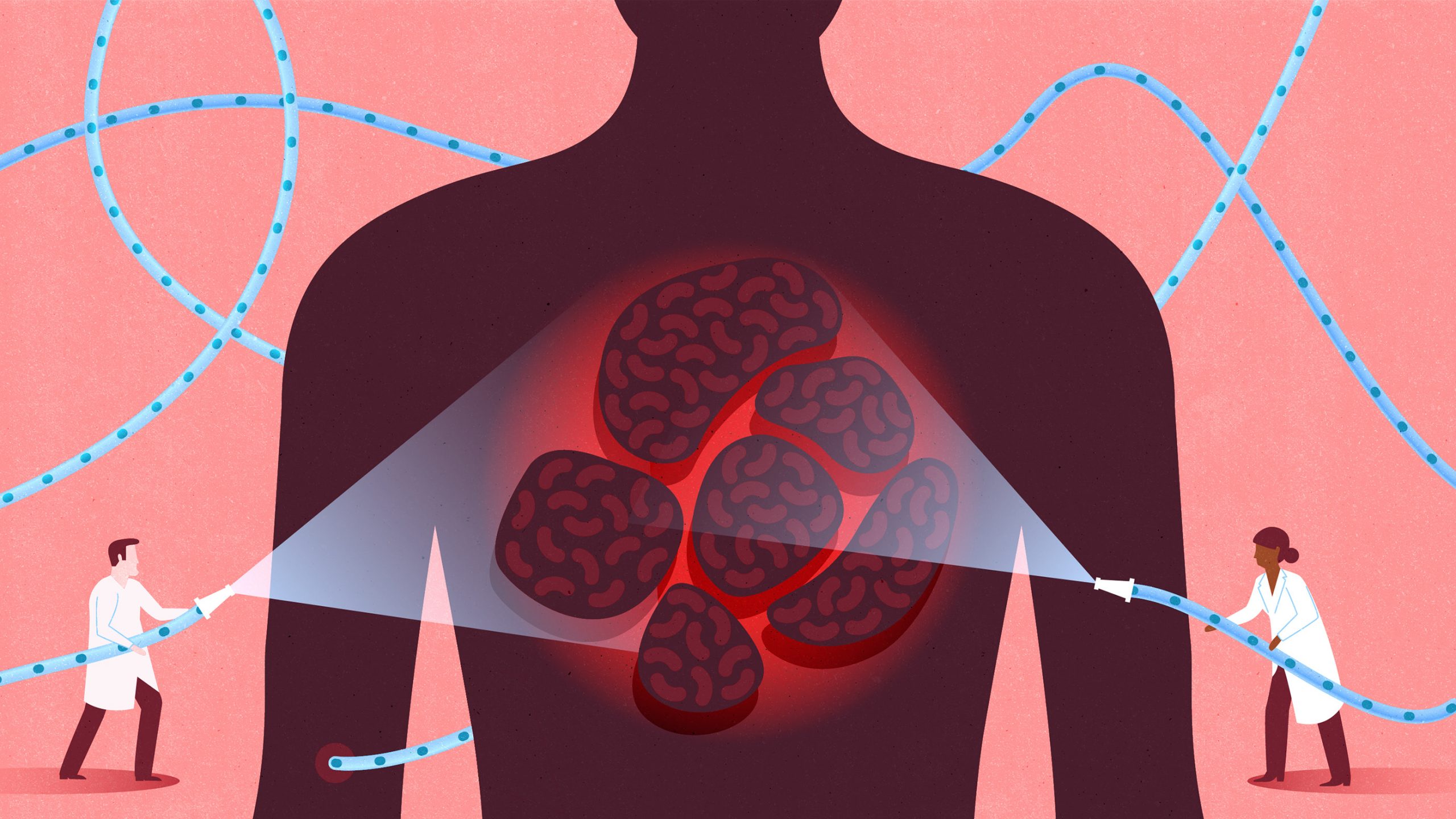 On June 27, 2017, doctors diagnosed Rahima Boboeva, a Tajik journalist, with cancer and operated on her. Rahima was diagnosed with ovarian cancer with spread to the colon. Doctors cut her ovaries and amputated her uterus. A colostomy device was placed next to his stomach, with which he lived for more than three years.

She says that she suffered a lot with colostomy because she did not have a job and did not have money to buy it. In addition, it was necessary for Rahima to buy bandages, plasters, napkins, alcohol, ointment and other things that she needs to treat the wound, but the allowance she received from the state was only 180 somoni, (18$) which was enough for her.

This female fighter says that she received chemotherapy seven times, and finally the doctors decided not to give her any more chemotherapy, because her kidneys are congested on both sides. If another chemotherapy is performed, it is possible that Rahima will die.

For many years, Rahima worked as a journalist in the magazine «Women of Tajikistan». She likes to read books, although she became a disabled person of the second group after the operation, but she fought with life and became successful.

«I saw on the Internet that many people said that no one has recovered from cancer, but I did not give in to this. I fought and I won. I hoped that I would be successful, as I knew many people who have overcome this disease» -said she.

«Familiar doctor» is not an oncologist

Most of those who say that they have not been treated for this disease, the reason for this is that the specialists referred the patient incorrectly. That is, the patient first goes to a relative who is a doctor and receives his treatment, while that relative is not a cancer doctor.

“People go to be treated not to specialized specialists, but to a doctor they know. And this «familiar doctor» will treat even oncology. And now, “thanks” to such “good deeds”, patients come to us at the fourth stage. Doctors themselves should send in such situations to the oncology center. After all, we are talking about a person’s life, people don’t have spare lives,” said the well-known Tajik oncologist, head of the department of oncology and radiology at the Tajik Medical University, Doctor of Medical Sciences Ravshan Yuldashev.

— According to him, cancer in the first and second stages does not give any special signs. This is general fatigue, nervousness, loss of appetite and so on. But if a malignant tumor is detected in the early stages, then the survival rate is about 90%. Therefore, it is necessary to regularly undergo preventive examinations. For example, women should undergo an examination of the mammary glands and cervix once a year. If specialists find neoplasms, then they are sent for a thorough inspection.

— In general, both men and women need to undergo a general medical examination once a year. No need to rely only on a biochemical blood test: this is not an adequate indicator of the presence of cancer in the body. If a person has poisoning, an infectious pathology, hematology diseases, this can also affect blood counts,” said Yuldashev.

Our heroine Rahima also says that she suffered from stomach ache (dysentery) for many months and had a high temper that even at night she stayed in cold water near her bed so that she could soak her feet in water. He consulted many doctors, but to no avail. Finally, she consults an oncologist, who admits him to bed. But at first they didn’t tell Rahima that she was diagnosed with cancer.

«Men leave us, but we must stand strong»

The doctors only told her husband and father about her illness, they didn’t even tell her mother, because her mother had high blood pressure, which could make her sick too. After hearing this news, her husband left Rahima: «He left me immediately. At the same time. When the doctors told him that «your wife is dying, there is no guarantee of survival, but we will operate on your wife for your peace of mind.» Then my husband and father received a letter for surgery. My husband left us. But I am grateful to my husband, that is, by his departure, he taught me to understand that a woman can live without a husband and take care of her two children. She should raise himself and his two children and continue her life. It is true that a man can leave us at any moment and I have learned how to live alone. That’s why we should not rely on anyone, then we will be able to cope with life’s blows more easily».

Rahima has twins, two daughters, whose names are Nushofarin and Mehrafarin. Now they are seven years old. When their mother had an operation, these two children felt motherlessness, because their mother was looking for treatment: «My husband said that I don’t need you, when you be sick, I said fine, but what are the children’s sins, they are innocent angels. But he left, while my husband was divorced from his first wife due to childlessness. I said that God gave you a twin at once, but he turned his back».

Thinking about death, why did I get this disease?

After six months, Rahima found out that she had cancer. The first thing on Rahima’s mind was the life of her two children, «so I tried to get treatment for them and survive.» Then I thought who I owe or who I got a book from, as I am a book lover and I used to get books from everyone and read them. I always talked with God”.

«Everything depends on the person himself, if he has a strong will, a person can fight against all diseases. I can give dozens of examples that cancer is a curable disease. Many of my friends praise me for fighting this disease, but if everyone were in my place and did not want to give up, he or she would have dealt with this disease and recovered«.

«I did everything possible and impossible to defeat this disease. The first thing I did was to calm myself down and tell myself that “Rahima, you are not cancer and the doctors made a mistake”. Then a doctor told me not to tell anyone about this disease and not to show the surgical site to anyone, as I used to show it to each other, and to always say that I am healthy. After all this, I felt good» — she told.

This is despite the fact that even the doctors told Rahima that they will not treat her anymore, because her disease is in stage 4 and there is no possibility of surgery, «but I said, I am not sick and I don’t feel the things you are saying. When they diagnosed me, I was not sick anywhere, all the doctors were surprised, «What did you do to get well?» – she said.

When she was sick, many of her friends — journalists, provided financial and psychological support to this woman fighting the disease, they gave her a good mood and made her enthusiastic about life, all of which could keep Rahima stable.

«I was mostly hoping for the journalist community, but called me from other professions and helped me. They called me every moment, wrote nice messages, helped me a lot».

Rahima loves to read books and currently works at the National Library of Tajikistan: “My life depends on three people, if I don’t work for a day, I and my two children will starve”.

“Cancer is not a sentence if you turn to specialized doctors”

As said, the famous Tajik oncologist, Ravshan Yuldashev, if during the Soviet Union, according to statistics, oncological diseases were in fourth place after infectious, cardiovascular diseases and injuries, today oncology stubbornly ranks second after diseases of the cardiovascular system. This suggests that the number of patients with oncoprocesses is increasing. Moreover, the oncoprocess has a tendency to rejuvenate. That is, the diagnosis of malignant tumors in young people has become more frequent.

— At the moment, all regional centers of the country are provided with oncologists. Therefore, I repeat, there is no need to go to the “doctor I know”. When detecting oncopathologies, the district oncologist sends him to the region where there is an oncology research center, and he will be under the supervision of an oncologist until recovery.

-To become a competent doctor-oncologist, you need to start from the student’s bench, and set the goal that this student will become an oncologist in the future. Only in this way, a qualified specialist will turn out from a student, who can diagnose and treat patients in time,” said Yuldashev, a specialist.

— Today, I cannot name an oncopathology that would not be treated here in Tajikistan. Bones, muscles, abdominal cavity, tumors of the head and neck — absolutely everything is examined and treated by us. Until 2007, these patients traveled outside of Tajikistan, in particular, to Russia. In October 2007, they successfully began to implement a complex surgical intervention for the operation of the esophagus. Annually 30-35 patients undergo these operations. Therefore, there is no need to travel outside the country for these cancer patients.

— In our Oncology Center, we use chemotherapy to reduce the volume of the tumor, radiation therapy to reduce the activity of cancer cells. A surgical method of treatment is also used. Targeted therapy is used, which is aimed at destroying cancer cells. Depending on the history, the doctor decides how to combine these therapies. The oncological network is developed, and even if something is invented in the United States today, we will find out about it in the near future — told doctor Ravshan Yuldashev.

On the question is there a chance for a person who has been diagnosed with cancer in the third or fourth stage to survive, doctor Yuldashev said: «If the patient was diagnosed with oncology in the fourth stage, this does not mean that he has no chance. Today’s medicine is advanced and developed. If this patient, even at the fourth stage, gets to a specialist, if there is a drug supply, the outcome of therapy will be good. For example, we have a colon cancer patient with liver metastases. We carry out therapy, the patient lives and works. Once again, if the patient gets to a specialist, then the chances of treatment are high. No need to get upset, even the third or fourth stage is not a sentence».

«Today after 5 years , I sometimes laugh at my sufferings, the thoughts I had seem strange. Because today I have fully recovered and sometimes I think that I was not sick and that the doctors made a mistake in my diagnosis,» — sais Rahima happily.

Rahima’s only dream is to establish an association for cancer patients in Tajikistan, so that she can gather them from her experience, encourage them and guide them to continue their lives: «I would tell them about my experience of struggles and raise their spirits. that I served before my nation. Because by hearing the name of the disease, a person can lose himself. I saw how depressed people were in the hospital. But it shouldn’t be like that, you should always fight, because cancer is treatable and I experienced it myself,» says Rahima Boboeva, a Tajik journalist.

For me as a journalist, Rahima has two heroes, one is to beat cancer and the other is to be able to talk about cancer. Currently, Rahima feels very well and works in the National Library of Tajikistan. And has no complaints.

“I learned that one should not give up everything that happens to a person and should use it for good” — said this female fighter at the end.